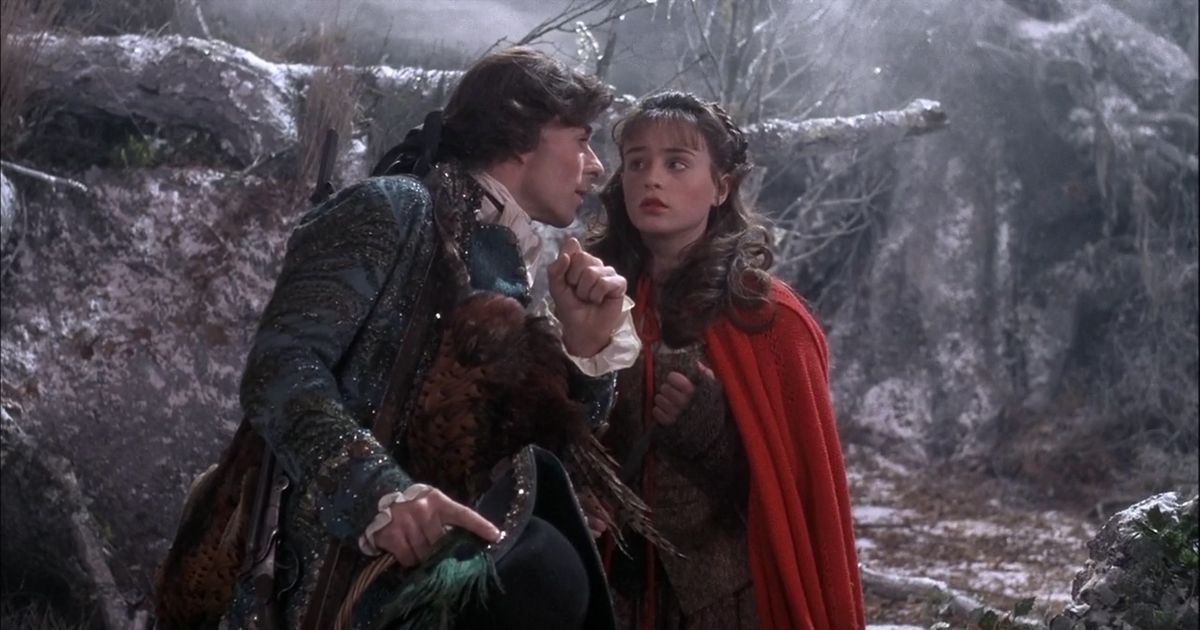 “Never stray from the path, never eat a windfall apple, and never trust a man whose eyebrows meet in the middle” – Angela Lansbury, The Company of Wolves (1984)

*Content warning: This post discusses themes of taboo sexuality and relationships that may be unsuitable or uncomfortable for some readers

One early October night in 2019, I scrolled through the selections on a streaming platform, looking for something new, something “me.” A couple pages in, I came upon The Company of Wolves (1984). Having been introduced to Angela Carter by a fellow fantasy-loving colleague in graduate school, the title caught my attention right away. After confirming the source material by the description and spotting the director (Neil Jordan, director of Interview With the Vampire), I immediately pressed play and entered a dark fairy tale that captivates me to this day. The screenplay was co-written by Neil Jordan and Angela Carter, and it is based on the latter’s short story of the same title featured in her collection, The Bloody Chamber.

The movie begins with the main character, a preadolescent girl named Rosaleen (Sarah Patterson), asleep during the day in her family’s large country home, a magazine featuring illustrations of wolves beside her. What follows instead of a singular plot is a nightmare with smaller stories embedded within via the characters’ telling of stories. Rosaleen dreams of herself as a Red Riding Hood figure in a medieval village, where the threat of wolves in the surrounding forest haunts the inhabitants for generations. In the dream, she learns everything she needs to know about werewolves and dark magic from her Granny (Angela Lansbury). In this post, let’s take a look at some of the haunting themes of this dark fairy tale:

The first glimpse of the red motif found throughout the film is Rosaleen’s lipstick. From outside her bedroom door, her older sister accuses her of stealing her lipstick; Rosaleen is asleep, and bright, red lipstick is clearly applied among other, more subtle makeup. Later in the movie, Rosaleen climbs a tree and finds a small pot of red paint in a nest, which she applies to her lips. For the rest of the film, when she meets the Huntsman (read more below), she wears the red paint on her lips.

We cannot forget about the red cape, of course: following the death of Rosaleen’s sister at the beginning of the nightmare, Granny begins weaving a red shawl for her. Granny works on the shawl with Rosaleen’s help through two stories. Once the shawl is finished and Rosaleen wears it, she begins to tell her own stories to various characters.

Against the wintry background that becomes increasingly snowy throughout the film, red makes a statement unlike most other colors. We as viewers obviously associate the red with Red Riding Hood, but in this context it also bears the association with maturity and sensuality. This theme is also mirrored in the blood that makes an appearance following a wolf attack or during the werewolf transformations.

Although the word “werewolf” is only spoken once in the film, the dialogue upholds cues to lead the viewer’s perspective in that direction. Brief glimpses of a full moon over Granny’s house appear onscreen when Rosaleen visits her house for the final time, even though the werewolves in this story do not require a full moon to transform. At one point, Rosaleen’s father returns from a hunting mission with a severed human hand that had belonged to the wolf he killed. The phrase “hairy on the inside” is used multiple times throughout the film to refer to men of low moral character or of a predatory nature.

Two werewolf transformations take place in this film, both different in method. The first transformation takes place in the first story Granny tells, about a man who returns from leaving his bride on their wedding night several years later and accuses her of infidelity upon seeing her young children. Infuriated, he begins tearing his skin from his body as he transforms into a wolf. The Huntsman’s wolfish traits also appear to be triggered by anger; when Granny strikes him after he refuses to leave her house, he emits a low howl, cleans his face his an elongated tongue, and knocks Granny’s head from her shoulders with supernatural strength. When Rosaleen arrives at Granny’s house and rejects the Huntsman’s advances (and shoots him in the shoulder with his hunting rifle), he transforms into a wolf. The form bursts from his human body, the snout protruding from the man’s open mouth and the rest breaking through the skin.

Anyone who is familiar with Angela Carter’s writing knows she subversively discusses sexuality in most of her fantasy or fairy tale work. Three types of taboo relationships or handling of relationships are represented in the film throughout the stories told to Rosaleen:

I would like to discuss one relationship in particular: that between Rosaleen and the Huntsman. Rosaleen meets the Huntsman on a journey to Granny’s house when he appears on her path through the forest. They immediately strike up conversation and talk about the forest and the stories they have been told. The Huntsman gets physically close with Rosaleen throughout this encounter, even putting his arms around her and pulling her to the ground at one point. Rosaleen does not follow the Huntsman’s lead and pursue anything more physical, but she does not fear him or attempt to escape him, either.

This relationship between the two characters could have been used to demonstrate the “predatory” nature of werewolves (it is soon revealed that the Huntsman is one), as many female protagonists are paralleled with an older male antagonist in fiction focusing on issues of power (think Disney movies, or pretty much anything else). A pendulum of tension and release surrounds the banter between them, to the point where we know this relationship is inappropriate and the Huntsman has taken on the role of the predator.

Just in case their conversation in the forest was not uncomfortable enough, the Huntsman makes a deal with Rosaleen: if he can reach Granny’s house before Rosaleen, he with his compass and she following her path, she must reward him with a kiss. He wins the wager in both the story and the film, but the result is very different. In Carter’s short story, the girl purposely takes her time to get to her grandmother’s house so the man will win the wager. By the end of the story, it is not-so-vaguely implied that they have engaged in a sexual encounter. In the film, Rosaleen keeps her distance from the Huntsman and takes measures to defend herself before eventually deciding to be “honorable” and give him what he was promised. The movie adaptation is much more subtle and is more flirtatious than sexual, but it still makes the viewer uncomfortable. The end of the movie shows a second wolf in Granny’s house, presumably Rosaleen, when the villagers arrive to help. The two wolves run off into the night, and Rosaleen’s mother begs the men not to shoot at the wolves. This ending, no matter how obscure, gives a bit more resolution to the story of Rosaleen and the Huntsman.

The film consists of a series of nightmares and stories told within the stories, all relating in some way to wolves or the tale of Red Riding Hood. Beginning with Rosaleen’s Granny, storytelling is used by the characters to share warnings or proactively modify behavior. Rosaleen takes up the act of telling stories to the other characters toward the second half of the film. This further demonstrates her growing up and building her independence.

To console the Huntsman after he transforms into a werewolf, Rosaleen tells him a story about a wolf-girl who is rejected by humans and returns to the underworld (this story shows many similarities to Carter’s story “Wolf-Alice,” also included in The Bloody Chamber). Having witnessed the power of storytelling from her Granny, Rosaleen uses storytelling to take on the role of a healer and a leader. Anyone who is familiar with literary or film analysis is most likely aware of the value of storytelling and its role in history and culture, and this film demonstrates the benefits of storytelling beautifully.

The Company of Wolves is one of my favorite films of all time. I find something new to love every time I watch it. Furthermore, it is a dreadfully under-watched film. If you are into horror, fantasy, dark fairy tale retellings, or if you just want to see what is up with this movie after reading this post, I highly recommend seeking it out.