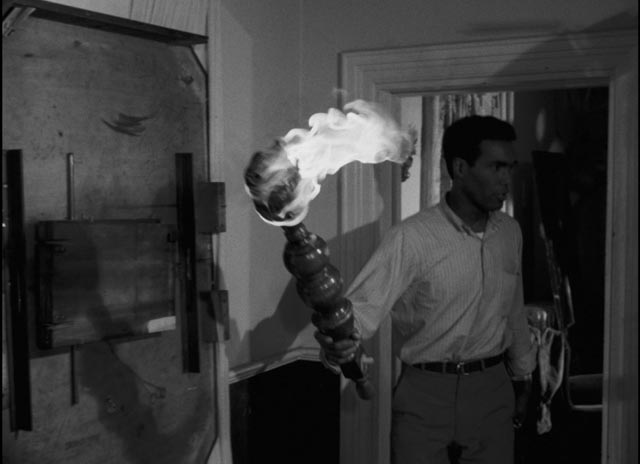 I want to preface this post by stating that I am a white woman, and I therefore have no experience to equate to those experienced by people of color. I do not think my voice is equal to or better than those of Black people on issues discussed in this post. My intention with this post is to highlight the work of Black individuals who have elevated the horror genre over several decades with their stories and performances.

The first film I wish to look at is Night of the Living Dead (1968). This is often a major film discussed in these conversations of horror and race, with good reason. Ben (Duane Jones), a Black man sheltering in the house that is occupied by the characters following a sudden zombie outbreak, represents the crossover of culture and horror stories. While director George A. Romero asserted that the casting of Jones as Ben was simply because the actor was best for the part, Ben’s presence in the film (as well as his fate) has become iconic in discussions of race in horror.

From a few scenes into the movie to the very end, we see Ben leading, protecting, and putting his life in danger for the others sheltering in the house, all of whom are white. They do not follow his lead, and Ben is the only survivor in the end. The following morning, he is shot through a window by a white man who is part of a group looking for survivors. Ben’s body is included among those of the zombies that had been shot by the men. His role in risking his safety to protect the others is brushed away. I remember the first time watching this film and how confused and angry I felt at how Ben’s life was taken so suddenly and without feeling. I realized as the credits rolled, however, that this narrative was all too familiar in a world where Black lives are treated with a similar disregard.

Throughout the 70s, more Black horror creatives produced genre films that remain popular today. I have not found much from the 80s for this post, but there was a definite emergence of Black horror directors and performers in the 90s. Despite this broad collection of work, issues of dehumanization and violence against Black characters (in addition to a lack of diverse writers and directors) continued. Even in films like Candyman (1992) that highlight the societal structures that disadvantage Black people, the hero is a white woman. Movie viewers did not see popular films take on societal racism from the perspectives of those who have experienced it until a couple decades later.

Jordan Peele’s work with Get Out (2017) ushered in a new movement in horror films. Following the story of Chris, a 26-year-old photographer visiting his white girlfriend’s family for the first time, this film conveys everyday experiences of Black men, from microaggressions to dark satirization of racial violence and oppression. This film (which is one of the few horror films ever nominated for Best Picture at the Academy Awards) changed the conversation of representation in horror films by addressing a horrific issue head-on in a horrific way. Peele’s sophomore directorial project, Us (2019), does not address issues of racial injustice as directly as Get Out. However, it does provide representation of Black culture and identity previously excluded from mainstream horror films.

I love horror and all it has brought to the world. However, I have come to see that horror is overwhelmingly white and male, and it always has been. We have gotten countless amazing stories from the horror creators we know and love, absolutely. The fact remains, however, that more diversity is necessary for the horror genre, not to mention our culture in general, to thrive to its full potential. We owe Black people the space to tell stories as they choose. As we have seen from screenwriters like Jordan Peele and other writers and directors, there is more to the Black horror narrative than Black bodies as victims.

Support Black stories, perspectives, and voices. The world is so much bigger than we know, and there should be space for more stories and creativity to be celebrated.

One Reply to “Black Experience in Horror Films”