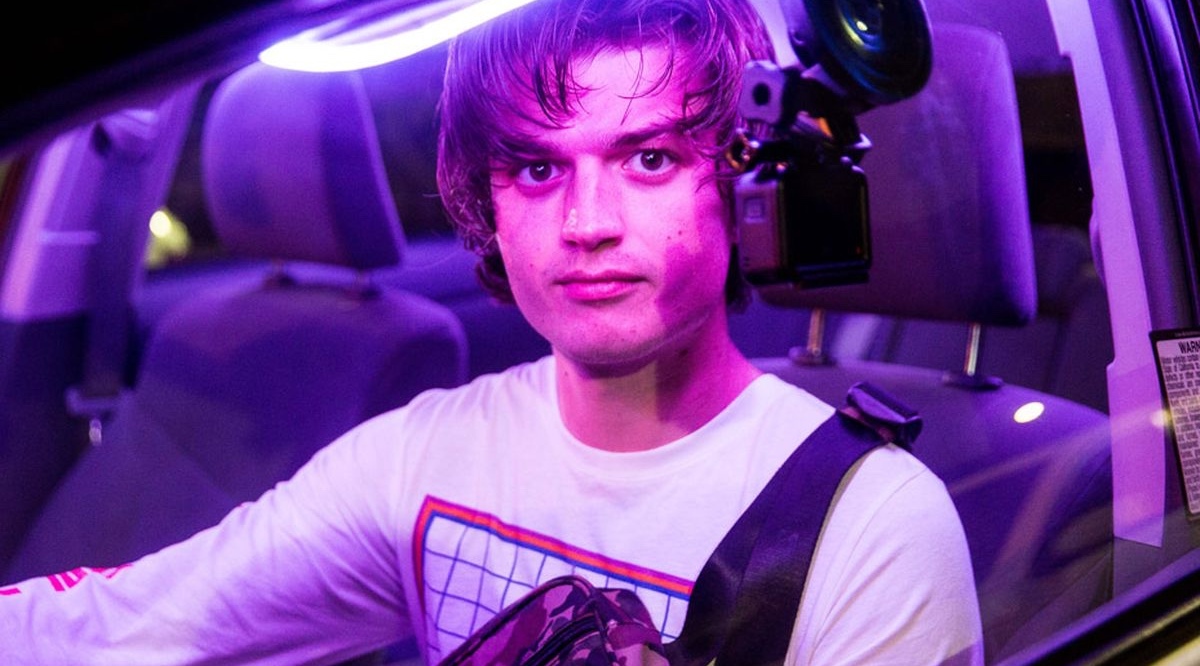 After a couple weeks of reviewing older horror films, I wanted to try out something more current. After checking my watchlists and getting feedback from fellow horror enthusiasts, I decided on Spree (2020), starring Joe Keery (a.k.a. Steve “The Hair” Harrington of Stranger Things). I knew this movie would be a wild ride, and it exceeded my expectations.

Desperate for internet fame, Kurt Kunkle (Joe Keery) tries every trick in the book for ten years in an effort to gain followers and views on Kurt’s World, his personal brand and internet presence. The beginning of the movie takes us through Kurt’s experience with online platforms thus far. This is told by Kurt himself through videos he has made about his life and how he got started in creating content. His attempts have included gaming, product reviews, and mixing music. In the moment of the film, he is a driver for a fictional rideshare app called “Spree.” Once we are caught up with Kurt’s World, we enter his camera-lined car and see him in action.

Kurt shares his current venture, which he calls “#thelesson,” in a livestream with his still-small audience. After some disturbing passenger interactions involving drugged water bottles and intentionally dangerous driving, Kurt confirms that his master plan for internet fame is live streaming the killing of unsuspecting victims. The events of the movie take place April 12, 2019 through the first hours of April 13, 2019; it is during this timeframe that Kurt receives the attention and following he has always craved.

In many ways, this films satirizes the obsession with online fame and what I call the “influencer complex.” As the viewer, you gradually go from having sympathy for Kurt’s desperate and insecure character to truly feeling the violent severity of his obsessions. Following the gruesome murders of multiple victims in the same day, Kurt’s only concern is his audience. A young influencer who Kurt used to babysit gives him blunt feedback throughout his livestream, and he is unimpressed by Kurt’s attempts at gaining attention. Furthermore, it takes a lot longer than it should for anyone to come after Kurt for literally murdering people on a live video. The effect of this widespread nonchalance is meant to be humorous, but it also sheds light on the stripping away of humanity that comes with the illusion of internet fame.

My only major issue with this movie had to do with the filming and presentation. The entire movie is shown through various personal camera footage and screen recordings from smart phones and social media pages. This cinematic choice becomes more chaotic as the film goes on. In many scenes, especially after Kurt expands his violent tendencies to his personal life, two or more screens are shared simultaneously. This includes various angles of the same experience, scrolling comments, and reactions, all happening at once. This could have been intentional per the message of the film, but that does not change how uncomfortable it can be for many viewers to watch for an extended period of time. I admittedly had to look away from some of the scenes like this to avoid getting overstimulated by everything happening at once. However, I think the cinematic choices that were made ultimately worked for this particular story.

Overall, Spree is a great horror spin on underlying societal fears of gig economy and social media fame. Nearly every character, major or minor, is obsessed with their followers and image on social media. Jessie Adams (Sasheer Zamata), a successful comedian who Kurt drives during the movie and becomes obsessed with due to her internet popularity, is the only one who dares to challenge the social media complex. Her denouncing of the obsessions the film satirizes throw Kurt off his rhythm. She has everything he has ever wanted, and she willingly decides to give it up following her first encounter with him. His entire life, Kurt has carried the belief that being noticed and admired is the only way to truly exist. When all of his efforts (harmless or otherwise) are publicly criticized as a sad way to live, he works even harder to achieve his goals. We see Kurt crack a little more with every scene, until we realize his situation is worse that we thought by the end.

I honestly enjoyed this movie a lot more than I thought I would. It is current, clever, engaging, and it pulls real fears we experience today to the surface. Joe Keery delivers an authentic and unsettling performance that will not be forgotten anytime soon. I guarantee there will be more and more horror films that tap into current issues like Spree has, and I hope they will be as successful.