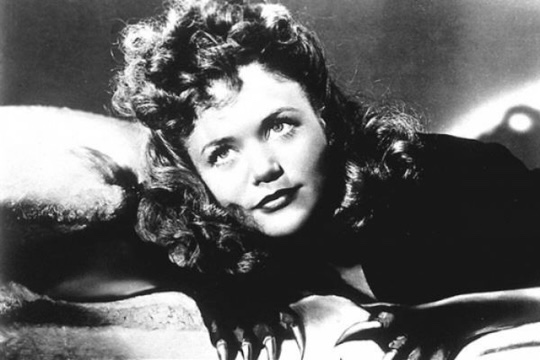 “They torment me. I wake in the night, and the trail of their feet whispers in my brain. I have no peace…for they are in me” – Simone Simon, Cat People (1942)

I am generally not a history buff…unless it’s film history. Last year, I checked out a nonfiction anthology titled Fright Favorites: 31 Movies to Haunt Your Halloween and Beyond by David J. Skal. This book contains synopses and reviews on 31 iconic horror films from the past one hundred years. I had seen most of the films discussed in the collection, to no one’s surprise. However, there was one movie presented in the book that caught my attention and did not let go until I finally watched it: Cat People (1942). I had somehow never heard of it before. After reading the synopsis and the author’s analysis of the themes and artistic choices, I knew I had to seek it out.

The movie begins in a city zoo. Irena (Simone Simon) is sketching a panther for her job in fashion. She catches the attention of Oliver Reed (Kent Smith) when she accidentally hits him with a discarded sheet of sketch paper. The two become acquainted quickly (they eventually become a couple). Irena shares that she lived in Serbia most of her life, and Oliver is the first true friend she has made in America. Oliver notices an unusual statue in the middle of her apartment when she invites him inside. She tells Oliver about her homeland of Serbia and the evil that was once practiced there. The statue represents the figure who rescued her people from dark magic.

While he continues to fall for her, Oliver notices more strange things about Irena. Animals react strongly and become defensive when they meet her. She suffers constant anxiety about the fables from her homeland. Even after they are married, Irena avoids even sharing a kiss with Oliver out of fear she will awaken a curse. When Irena agrees to see a psychiatrist (Dr. Judd, played by Tom Conway), she is offended to find out that Alice (Jane Randolph), who has an obvious attraction to Oliver, had a part in setting up the appointment.

Irena does not return for another appointment. When once again visiting the panther at the zoo, Dr. Judd shows up and asks her why she did not return. Irena answers that she does not believe he can help her. Irena becomes obsessed with the relationship between her husband and Alice. Despite her original aversion to her curse, Irena uses her transformative abilities to reclaim her upper hand and take control of her marriage and her life.

Cat People embodies one of my favorite styles of horror films: a blend of horror and fantasy. The orchestral score blended with the artful lighting and cinematography create an enchanting atmosphere. Although Irena’s curse causes her to transform into a panther, cats of all species are represented throughout the film. Irena lives close to the zoo and can hear the big cats at night. Paintings and statues of cats and cat-like figures are placed throughout the scenes. Several pet cats appear in various locations. The film embodies the haunting Irena feels until she is overcome completely by what she fears the most.

One scene in particular from Cat People has become iconic in horror cinema. Alice visits an indoor swimming pool, where she ends up swimming alone in the dark. She hears an animal snarling and circling the pool where she cannot see it. The snarls become more aggressive, and Alice’s screams join them. After Alice calls for help, Irena appears. She acts as though she is there to ask if Alice knows where Oliver is, but her demeanor makes it clear that she is enjoying Alice’s discomfort. After Alice exits the pool and asks for her robe, the attendant holds it up and shows her it has been shredded. The scene never shows the figure tormenting Alice, but it is clear that Irena has achieved her feline form and learns to use it as she pleases.

One of the many things I love about the research I do for this blog is learning about movies I otherwise would never have known existed. Cat People is one of those movies. I find something new in its details every time I watch it; at a short 72 minutes, it is an easy one to fit into my schedule. It is a psychological horror film wrapped in a classic cinematic experience. Cat People, with its subversive messages of female agency and power in addition to its artistry, remains a relevant and immersive midnight movie for horror fans and cat lovers alike.