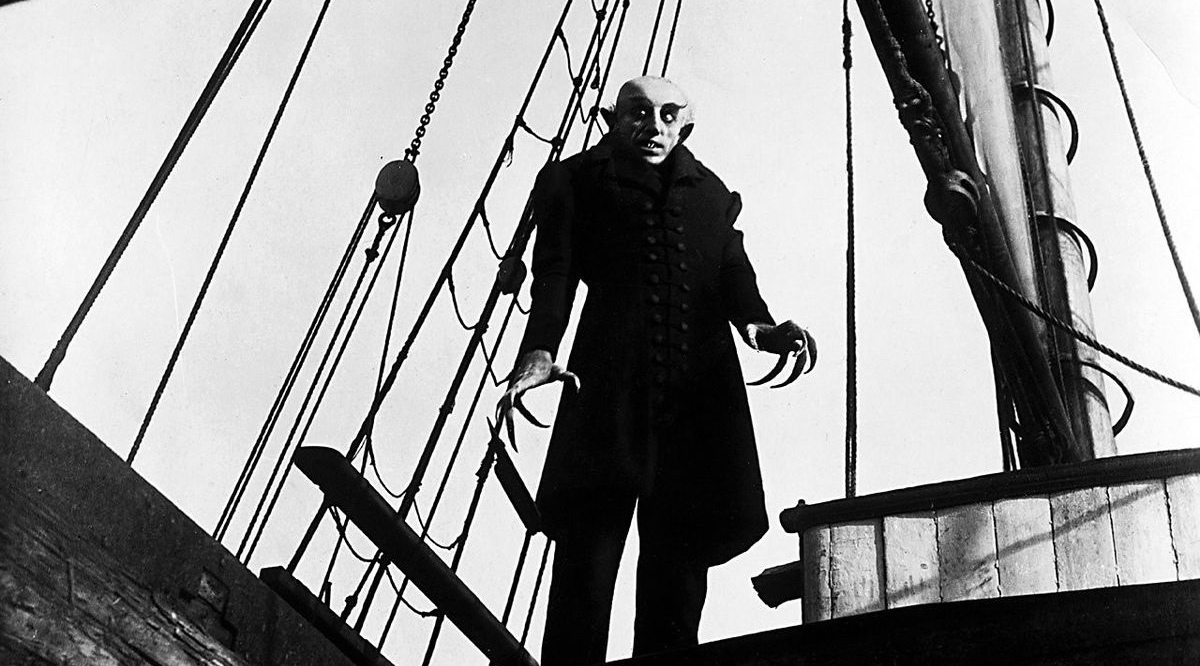 “And when he had crossed the bridge, the phantoms came to meet him” – Nosferatu (1922)

It is not often we celebrate ONE HUNDRED YEARS of any film, let alone one of our beloved horror films. One rainy October night in college, one of my favorite classic movie channels delivered to me Nosferatu by F.W. Murnau. Since that night, it has grown into an important player in my film collection. In the bigger picture, it has always been a key influence for horror films. Originally released on March 4, 1922 in Germany, Nosferatu is truly an immortal horror classic.

*Note: Some character names are different from the German version.

Nosferatu essentially follows the story of Dracula by Bram Stoker. Johnathan Harker (Gustav von Wangenheim) departs from his fiancée, Nina (Greta Schröder) to conduct business for a new client in Transylvania. The locals he encounters on the way warn him of the dangers ahead, but he continues on. When he meets his host at last (known as Count Orlok, played by Max Schreck), Johnathan notices that the man does not look or behave like anyone he has known. Orlok is very tall, has long fingers, pointed ears, deep, dark eyes, and sharp teeth. Even more shocking than that, Johnathan witnesses his host’s desire for blood. As Johnathan tries to complete his business and return to his beloved Nina, he finds that the Count’s part in their lives is far from over.

Like many great horror films, Nosferatu has had a wild journey to our screens. I cannot for the life of me remember what the specific source was, but I read somewhere that Nosferatu still exists today thanks to German bootleggers. Any film from this era being preserved this long is something to be celebrated, and Nosferatu‘s continued legacy shows the importance of preserving art. Orlok’s iconic look seems to be the most impactful component of the film. His unsettling appearance horrified audiences in its time and inspired other creatives from then on. From an episode of Spongebob Squarepants to Jemaine Clement and Taika Waititi’s What We Do in the Shadows (2014), the Nosferatu’s likeness has appeared over and over again in popular culture.

Not many films sustain over one hundred years. With its groundbreaking terror, stunning production design, and haunting organ music throughout, Nosferatu started something that is still constantly evolving: the vampire movie. I do not doubt that I owe many of my vampire movie nights to this film. Nosferatu is a testament to so many phenomena that film allows for the world: defying change through time, influencing new stories, and transporting viewers through an immersive world that hypnotizes them far away from their own.